Roots in the British Museum

I regret having to leave London before the lecture "On not going home" at the British Museum on February 7, when Professor James Wood "explores the estrangement of voluntary emigration - the sense of losing the country you leave and failing to find another".

Here is a link from the British Museum blog:

‘Exile is strangely compelling to think about but terrible to experience’
John-Paul Stonard, art historian

My experiences are with another aspect of this theme: Growing up as a 3CK - Trans Culture Kid, an involuntary émigrée, a child of voluntary emigrees - and the process of finding my place in the world as a Between Cultures Adult.

A friend once told me about taking some visitors to a scenic spot near her childhood home, and surprising herself with a childish and unspoken response when they were admiring the view: "This is mine!"

I could not recognize the emotion behind "this is mine". I had read «Roots» by Alex Haley a long time ago, and some years later, when my husband and I subtitled the TV series, I began to wonder: If I were to look for my roots, how would I go about it? My answer was “Don’t go there. Between is as good a place as any." 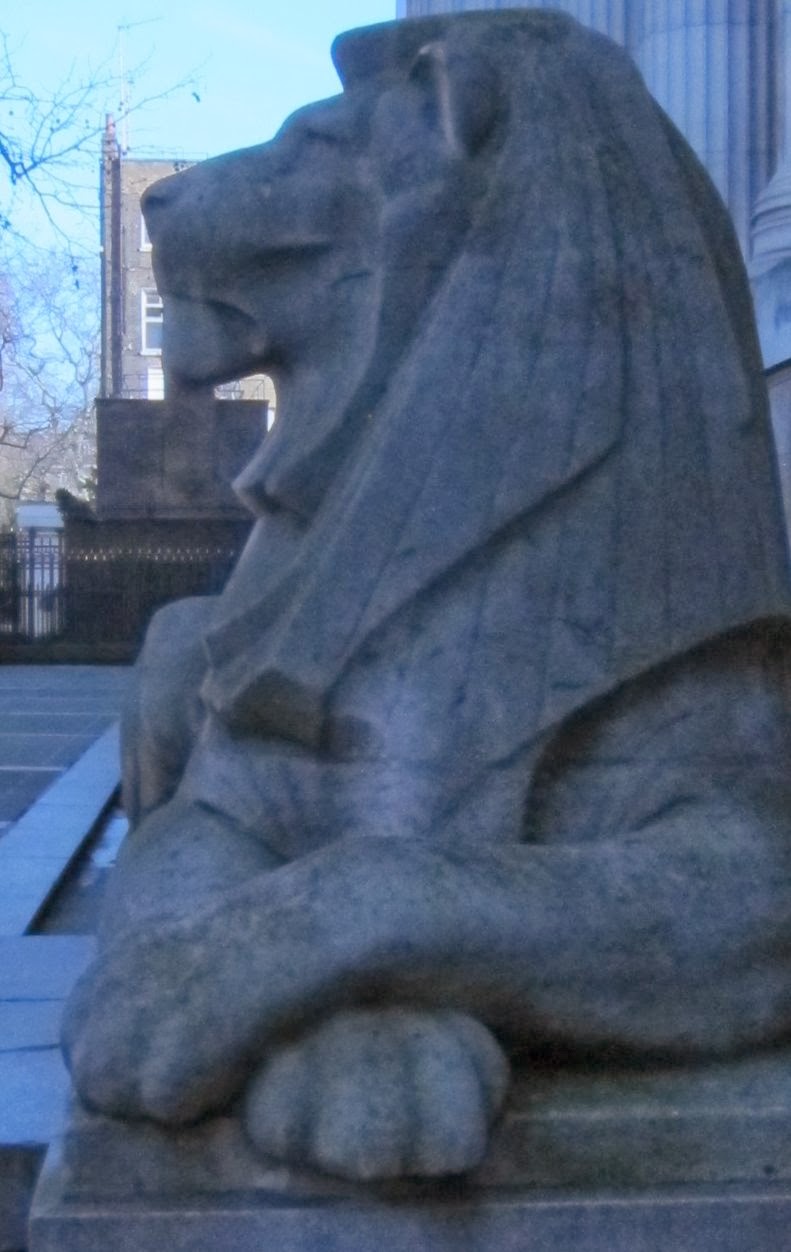 And a few years after that, when I visited The British Museum for the first time, I almost burst into tears of belonging.

At the time I did not have the leisure to explore this discovery, but now I am back, and I went to the Montague Place entrance, as I had done before. And even before I got inside there was a root: an impossibly handsome and noble lion.

I have no idea how or why, and I don't believe in the supernatural, but this lion is mine. It belongs to me. The most probable and very prosaic explanation, of course, is that I must have seen this picture in a book somewhere. 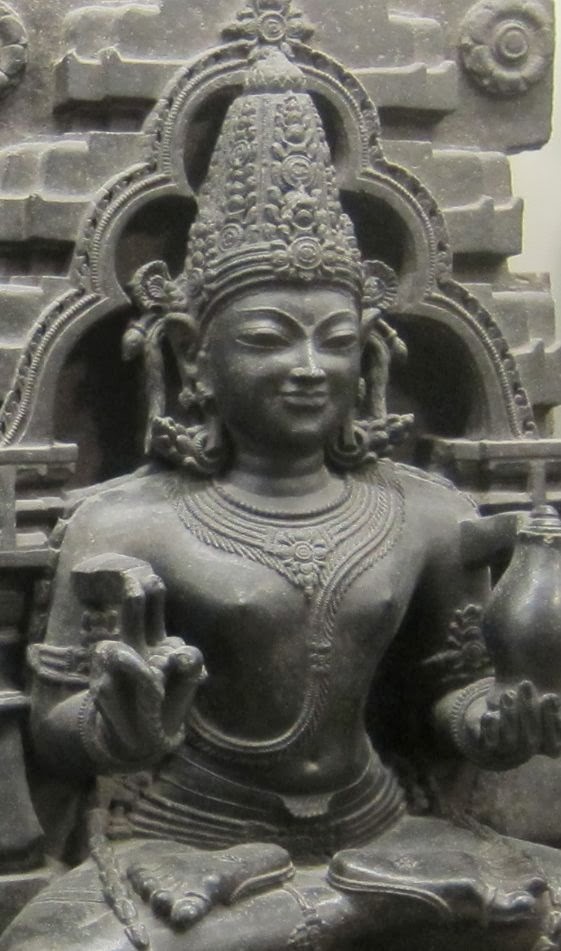 A few steps further in, near the Member’s cloakroom, there are some bas-reliefs. This lovely women with the mischievous grin reminds me of someone I loved and called "big sister" in India a long time ago. She belongs to me.

All these figures belong to me: Images like this are woven into the rich and confusing tapestry of my early life.

The huge bronze bells from China in the stairway … they aren't visible now because of renovations, but they belong to me. And, like the lions at the entrance, I do not know how or why, and I think: Book? Probably. 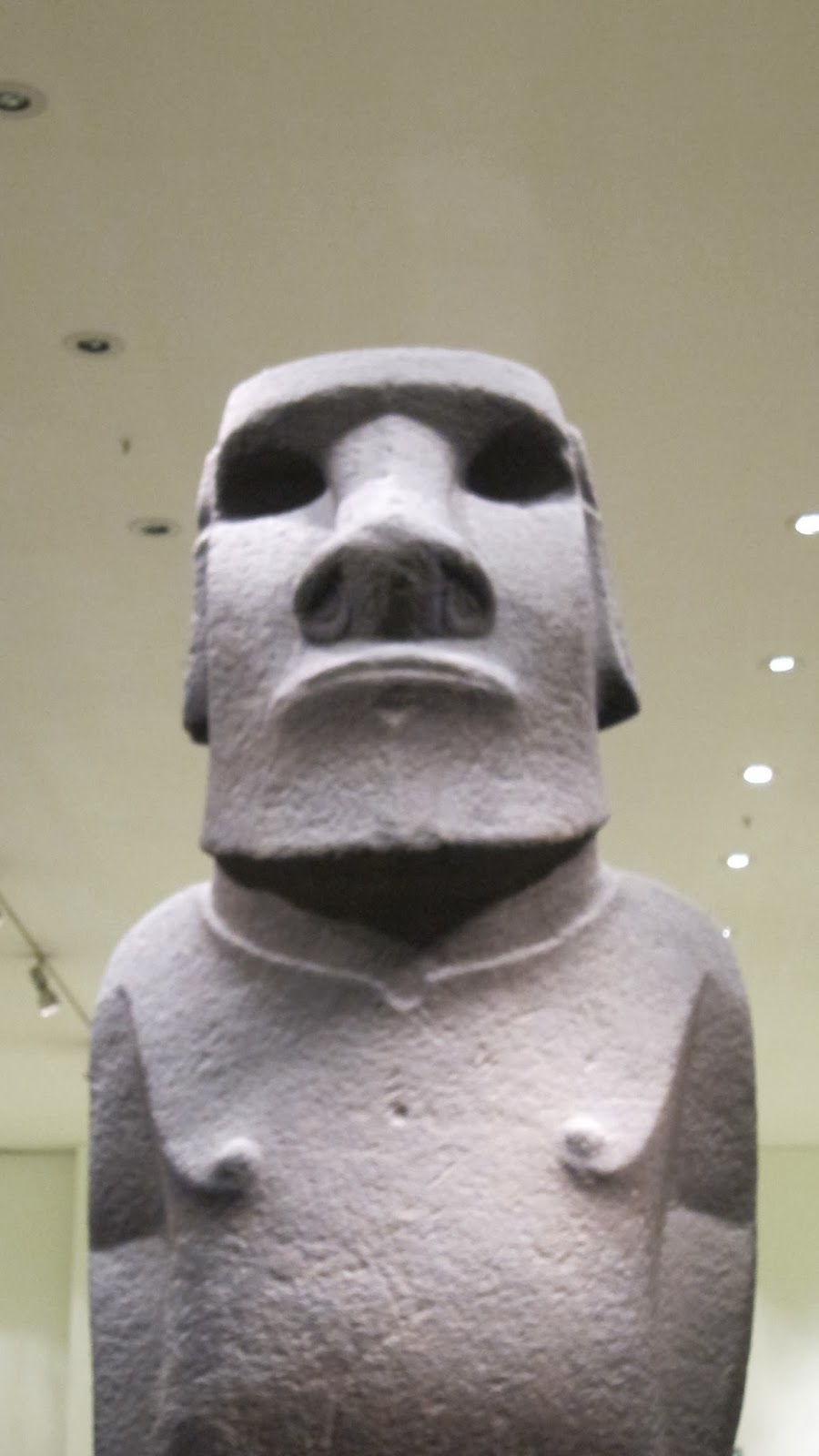 But I do know why the moa belongs to me: Thor Heyerdahl was Norwegian, like me, and “Aku-Aku: the Secret of Easter Island” was much read and much loved by the bookish child I was.

Time seems to have shown that many of Heyerdahl's theories were wrong, and a biography has revealed that my hero had feet of clay, but he is mine.

As are the moai, and the harrowing story of Easter Island that Jacques Cousteau has told so well in “Blind Prophets of Easter Island”. Cousteau belongs to me. As an adult, I spent a couple of years virtually sailing the seas with his expeditions, translating his voice-over commentaries in the comfort of my own home. 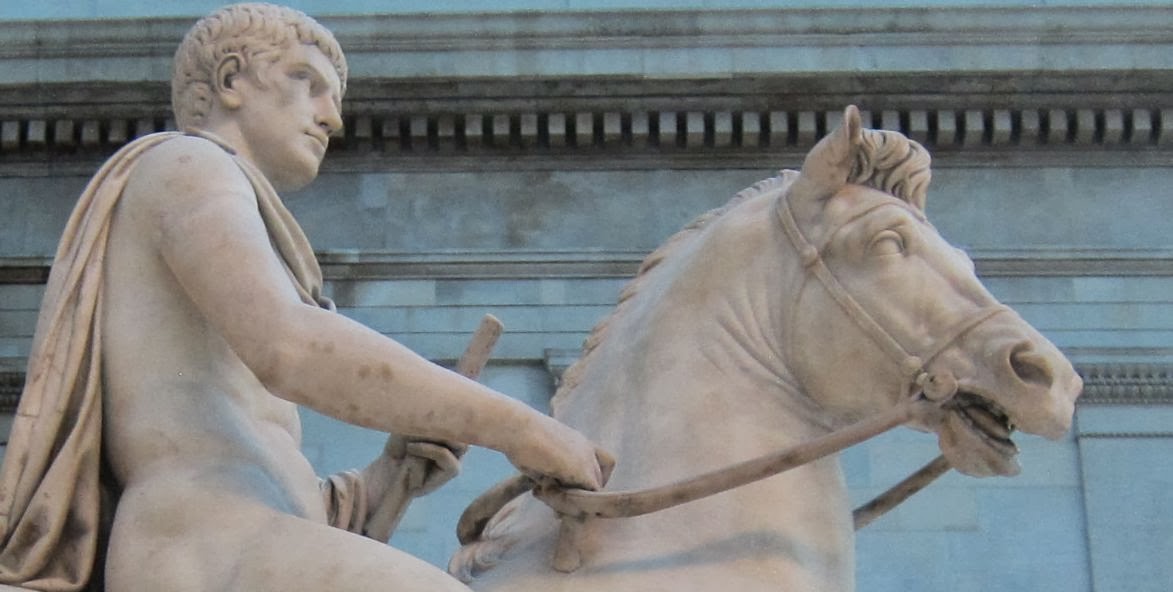 This handsome and determined Roman youth and horse certainly belong to me, and to my teenage years in Rome.

Where the statue of Anita Garibaldi on a galloping horse, baby on one arm and pistol in the other hand, was a huge contrast to my repressed life in a convent school.

Anita connects me to Marian Heyerdahl's sculptures of "Terracotta Woman", which I saw before I saw the Terracotta Warrior exhibition the last time I was here at the museum. Why is there so little to see in the museum about how revolution and war affect the lives of women and children and non-combatants?

I found these posters in the corridor as I was going to the plane, They were probably travel ads ... 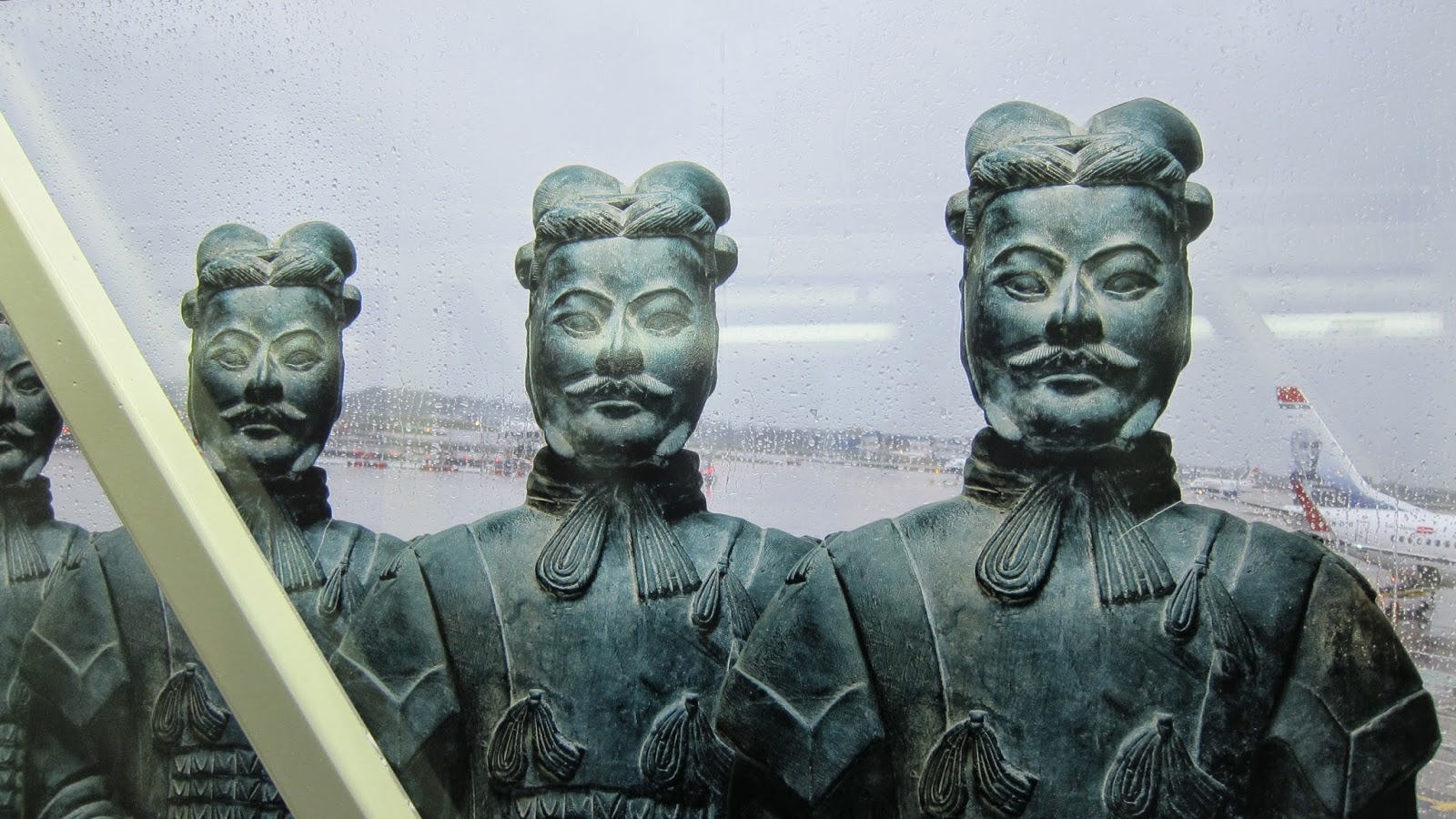 ... as the warriors were wearing flipflops. 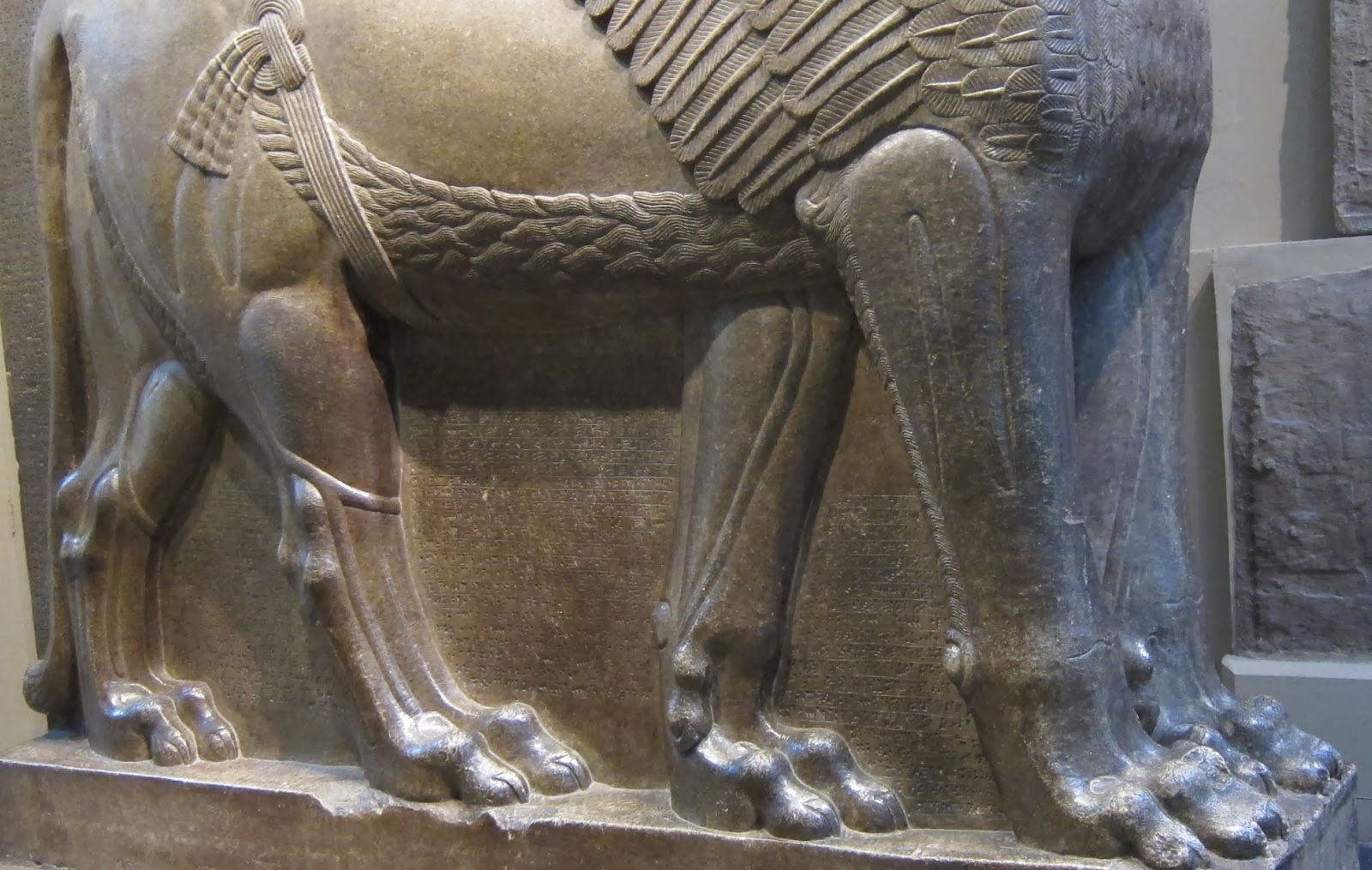 All the five legs of the winged Assyrian human-headed bull belong to me. And I know why, too: They fascinated me in one of my history books in Darjeeling in the 50s.

And these were also in schoolbooks and books I read for fun ... The snake-tailed harpy .... 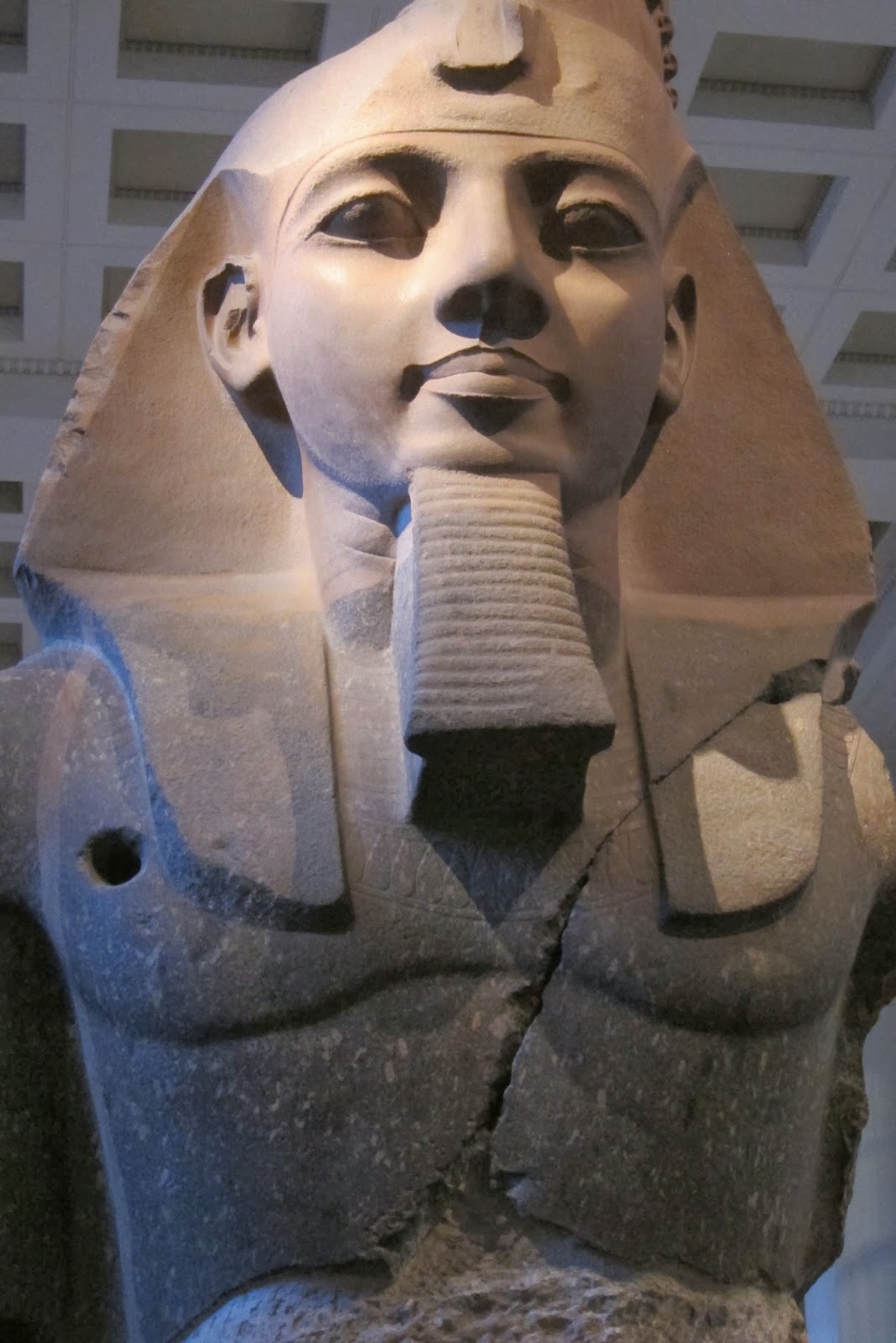 Who reminded me of "Look on my works, ye Mighty, and despair".

And now I read that Shelley's poem about Ozymandias might have been inspired by this massive fragment.

I could go on and on, but I'll get to the point instead:

I had not fully realized the importance of Real Things. Three-dimensional objects in the museum trigger recognition, belongingness, in the same way that smells do. And with recognition come stories ... and memories of many different cognitive frames.

I would guess that most 3CKs know about frames from an early age, even if they do not have words for this concept. A book that helped me make sense of it as a child, was Edwin Abbott Abbott's "Flatland: A Romance of Many Dimensions" from 1884.

It brought home to me that some people are incapable of recognizing other viewpoints than their own. And as an adult I know that when people in one frame have power in a situation, persons from other frames can get quashed. Invaded. Colonized.

In "THE CERTAINTY OF NORMLIGHTS" I wrote about such an experience. I soon learned to give in immediately when met with one-framed certainty from an adult ... the only alternative was to bang my head against a wall of aggressive incomprehension and get a reputation for being difficult.
But I was lucky - I also met many whom I thought of as REAL PEOPLE. People who surfed comfortably between cognitive frames, showing me that it was possible. People who used communication tools for bridging frames when there was a mutual willingness to do so ... as I have described here, about a discussion on religion:
http://freudfri.blogspot.co.uk/2011/02/weird-and-wonderful.html

In my wanderings around the museum, thoughts about cognitive frames have led to thoughts about power. About the difference between win/lose power and win/win power. I haven't found an English term yet, from Norwegian it translates into "static power" and "expansive power".

There is only a finite amount of win/lose power, and if someone gains power, that means others have lost power. There are many depictions of win/lose power here, and all are now demonstrations of power lost.

I have been looking in vain for a human statue with the noble forcefulness of the lions at the Russel Square entrance. Ramesses II, huge as he is, has the face of a boy. King Edward the Seventh looks bored and uncomfortable, even if he does so from above us: 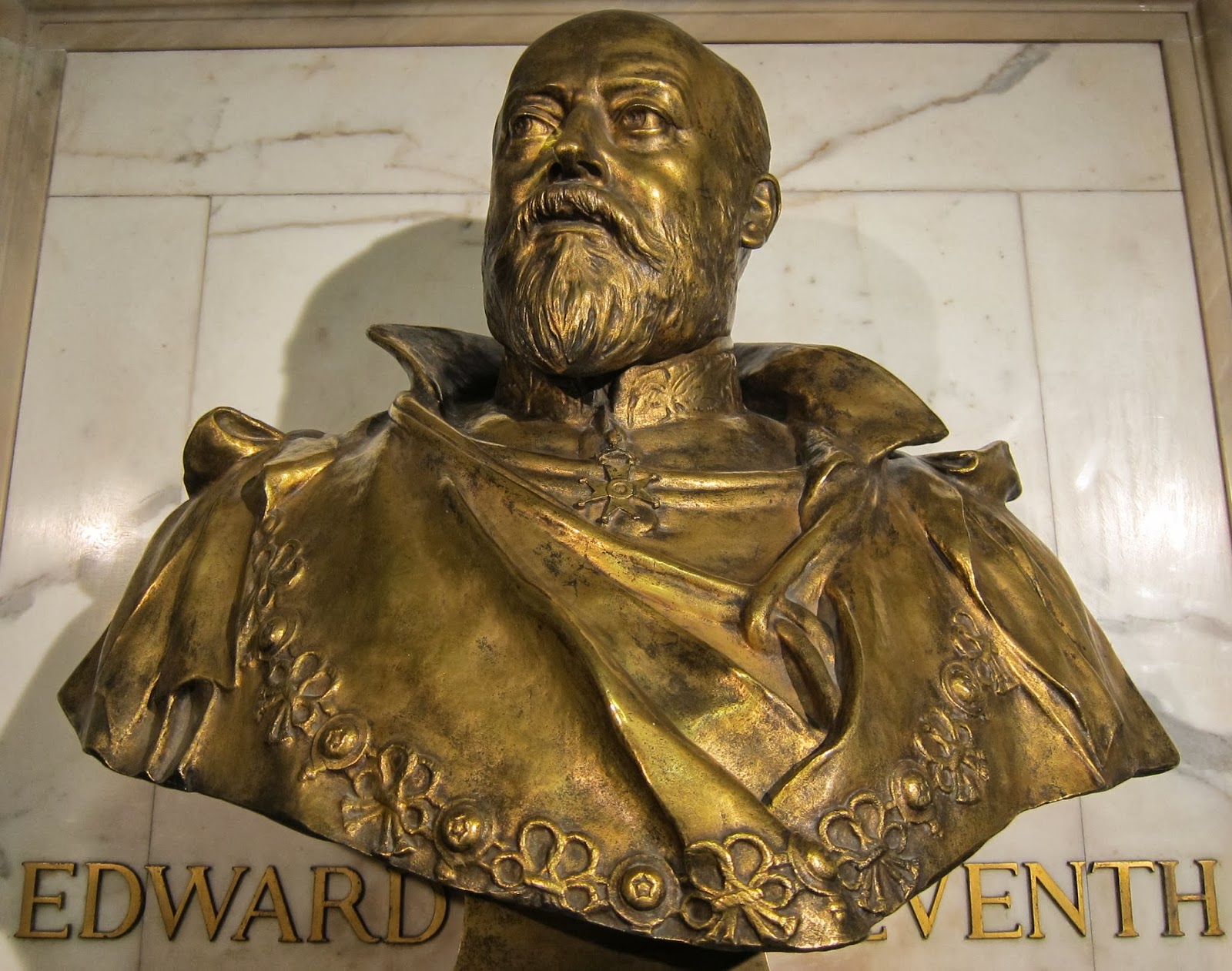 In the Wikipedia article on Ozymandias I found another sonnet, by Horace Smith, on the same theme, with a different ending:

We wonder,—and some Hunter may express
Wonder like ours, when thro' the wilderness
Where London stood, holding the Wolf in chace,
He meets some fragment huge, and stops to guess
What powerful but unrecorded race
Once dwelt in that annihilated place.

A fitting epitaph to win/lose power.

Now I am looking for manifestations of win/win power here at the museum. Expansive power - power that grows with use and sharing.

And the win/win power that I see here lives on in the creations of craftspersons who made everyday objects with competence, inventiveness, artistry, flair and ... sometimes ... humour. 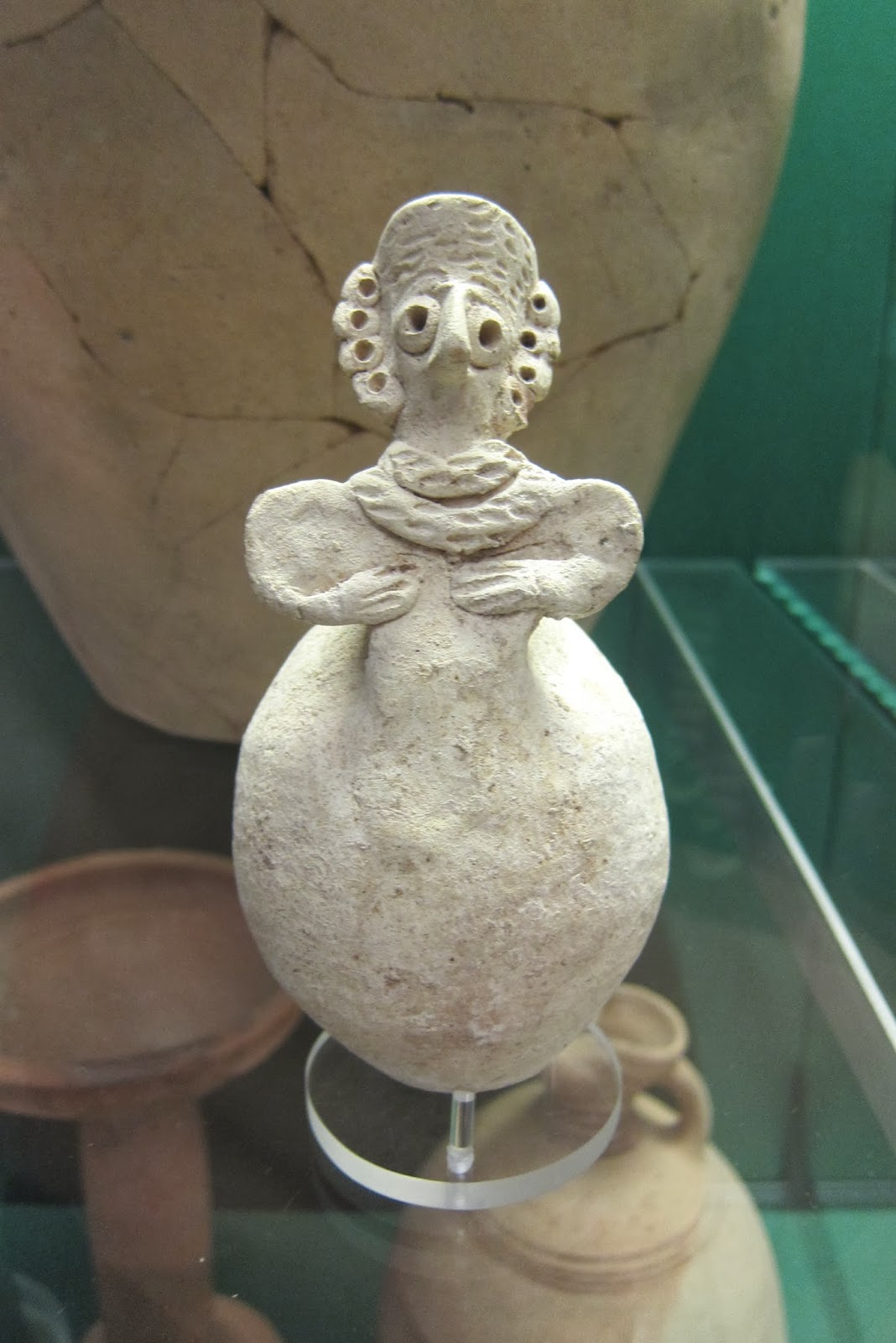 Like this little jug, that can also be used as a sprinkler.

I have made a lot of mediocre pottery in my past, and jugs very much belong to me. I could spend a year here just exploring jugs, looking at the design, discovering what the potters did to try to avoid annoying drips without making the jug look as it it's pouting.

There is art here too, of course, and much of it seems to transcend what should be possible with the tools that were available.

And to me, the real immortals are the artists and the little people, people whose lives might have been under the radar and outside the frames of the powerful, people who just got on with it, making objects that speak to us centuries later, that impress us with the neatness of their design and their utility, objects that make us marvel, and catch our breath, and sometimes smile, and ... objects that make me paraphrase Shelley:

Look on their works,
ye Mighty,
and despair!