A pox on pills and talk!

Anonymizing everyone but XX, who asked to be quoted.
Can't be bothered to do so in screenshots, but names don't come up in search there.

Later: Also anonymizing all names and screenshots because of XX's latest reactions.

But when I stumbled upon the searingly intelligent exposé of one of Philip Hickey's articles that I collected in the second screenshot, I decided to post both screenshots now and write later. Enjoy! 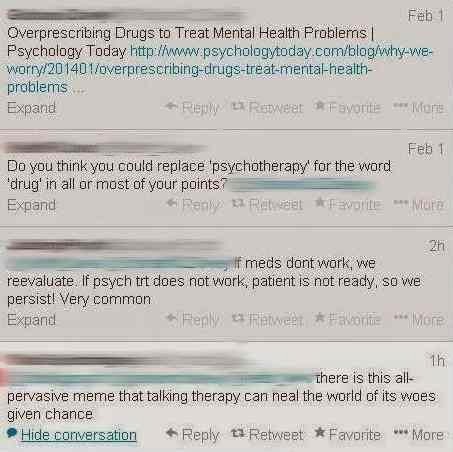 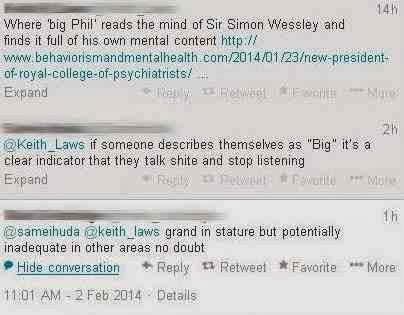 There have been some responses to this post. And before I reply to them, I want to quote my very favourite definition of psychiatry, from RationalWiki:


Psychiatry is the branch of medicine that deals with the diagnosis, study, prevention and treatment of mental disorders in humans and, like other fields of science, is not safe from unfounded criticism or woo. It is particularly hated by scientologists, who refrain from taking psychiatric drugs, and is targeted by conspiracy theories from saidcult religion.

Would someone please explain in what way psychiatry is a field of science?

And how does it feel to be so sure that criticism is unfounded?

I work as a translator, and from my perspective, criticism is something to be taken seriously, investigated and learned from, with the occasional sigh of relief when the criticism is shown to be unfounded. And most of my translations are television subtitles, where viewers have a chance to compare with the original,  and I get to expose my mistakes to thousands of people simultaneously.

Learning how to deal with performance anxiety is very much a part of my job. And I wish it was just as important to learn this in the mental health care professions.

Now to the responses:


I may be many things but I ain't no pusher madam.

I apologize to you, and to anyone else who is offended by the word "pusher". Just let me know which word you prefer in this context, and I'll switch to that.


what's your insightful point? And yes who are the pushers exactly?

Where did I claim to have an insightful point? I do have a perspective, though: That of someone who has been badly harmed, both by toxic psychology and by toxic psychiatry. I have written a bit about my way out of it here:
http://freudfri.blogspot.no/2014/01/my-way-opposite-direction.html
The short-short version is this:

The problem is that I need to base my work on my actual problems, my actual knowledge and experience ... none of which align with psychiatric (or psychoanalytical) realities.

Again I apologize for the word "pushers", and offer to replace it with a word of your choice.

If you look closely, I think you will see that I did not write that I thought any of you were some-word-that-is-not-pushers of harmful pills and harmful talk. I have no idea if you are or not. I wrote "I was going to save the first screenshot for a post ...".

And I apologize again, this time for not making it clear that it was the statements in the thread I was interested in, and not any of you.

The only one of you that I follow, AFAIK, is JH, and I do so because he posts many interesting links. He comes across, from my POV, as a bit narrowmindedly evidencebiased, but there's no point in only reading stuff that I agree with.

Let's see: I wrote that I was going to write "... a post on the strange battle going on between pushers of harmful pills and pushers of harmful and inefficient talk therapy". I can't find the word exposé in connection with my writing plans.

I will let you know when it is posted. The title will be "Normlight and the light in the dark", and it is a continuation of "There is no Dark Side, there is only fear of the dark".

And I will keep the thread in the screenshot, but, as I am more interested in cognitive frames than in names, I will erase all of you - unless you state that you prefer to be named. What I found interesting in this thread, was the interchangability of pills and talk.

I had to search for Dr ElephantExpert's response in order to embed it, as it was not a reply to me, and I finally found it:

And I have a question for you: Am I demonstrating unfounded criticism, woo, scientology or something else?