I was so pleased to be dumped into this absurd situation, as I've been on the lookout for a simple story that illustrates psychiatric invasion of individual stories. This is perfect!

In a series of tweets, a psychiatrist explains why I am wrong about the title of my blog, and why he is right.

I have tidied up our parallel monologues a bit, but I posted the original version in screenshots at the end, just to prove that I'm not making this up.


@DrElephantExpert : is the elephant the truth or the one in the living room?

@ivaalsg : Neither. The elephant is the one wise men said was a tree trunk or a snake or wall http://freudfri.blogspot.no/2011/02/we-are-whole-elephant.html

@DrElephantExpert :  by which I mean you can't claim to be the whole elephant just the trunk tusks flanks or legs

@ivaalsg : IMO you, I and everyone are the whole elephant. To me, this is a reminder that people are more than the bits we notice.

@ivaalsg : See previous post. Did you read the link before you replied?

@DrElephantExpert : I read it. But I was referring to original parable. Multiple perspectives integrated to understand and perceive whole.

@DrElephantExpert : so patients viewpoints including ones unhappy with/ harmed by their care are also important in understanding all of MH
@ivaalsg : I mentioned having been harmed to test if any of you would respond to that. None did. Interesting.

@DrElephantExpert : I mentioned all medicines are potentially harmful

@ivaalsg : That you did: "all medicines potentially harmful so ban all medicine? "

@DrElephantExpert : & I also mentioned patients can be harmed by care (as 4 any medical specialty)in tweet u responded to.

@ivaalsg : Your first response: "and why are all talk therapies inefficient? Oversimplified"

@DrElephantExpert : but my point is about your blog title is "we" refers to all classes of viewpoints about mental health and that includes medical 2


I gave up there, as I have often given up when trying to communicate with experts on mental health care. I could, of course, have pointed out that "we" refers to people, and not to viewpoints.

But pointing out such things used to prove that "Her verbality often served to obscure problems, and she fully demonstrated omnipotent control, where she tries to control the therapist and use that as a defense against looking more closely at her own problems".

And giving up is a tacit agreement that the expert is right. A win/win situation for the expert. 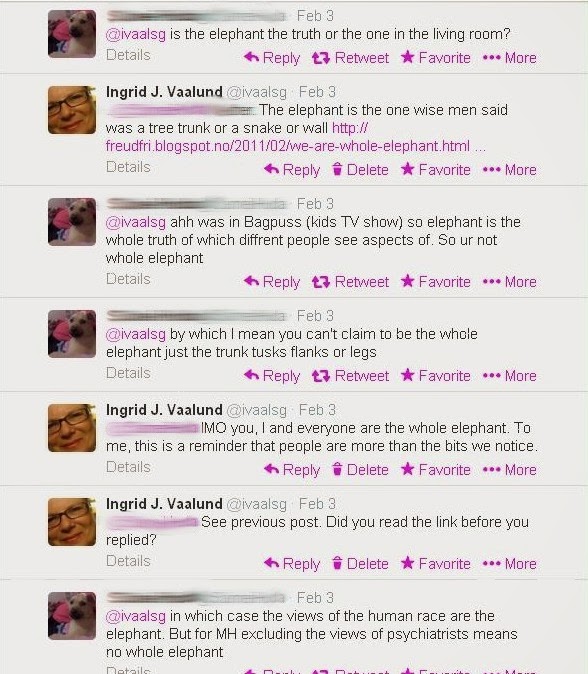 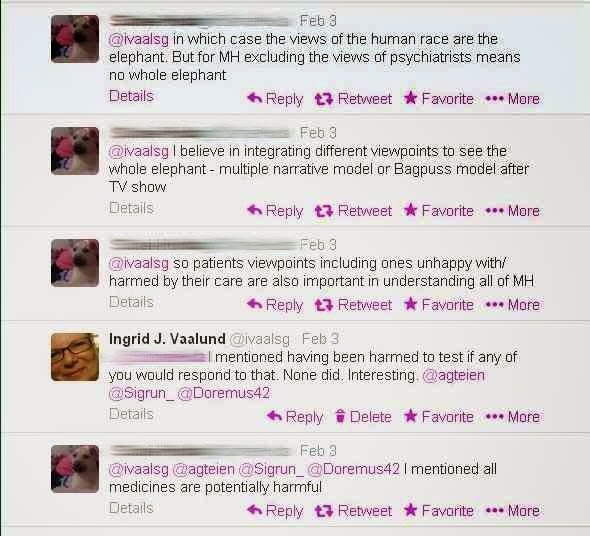