Review of The Therapy Industry: the Irresistible Rise of the Talking Cure, and Why it Doesn’t Work
By Paul Moloney, Pluto Press, 2013

David Smail on magical voluntarism:
Distressed people are supposed,
via a short but perhaps intense period
of interaction with a practitioner,
to transform themselves
into people no longer feeling distress.


I wrote about pscientific fundamentalism in my previous post, and in this one I recommend two books by David Smail that I'm reading at the moment: 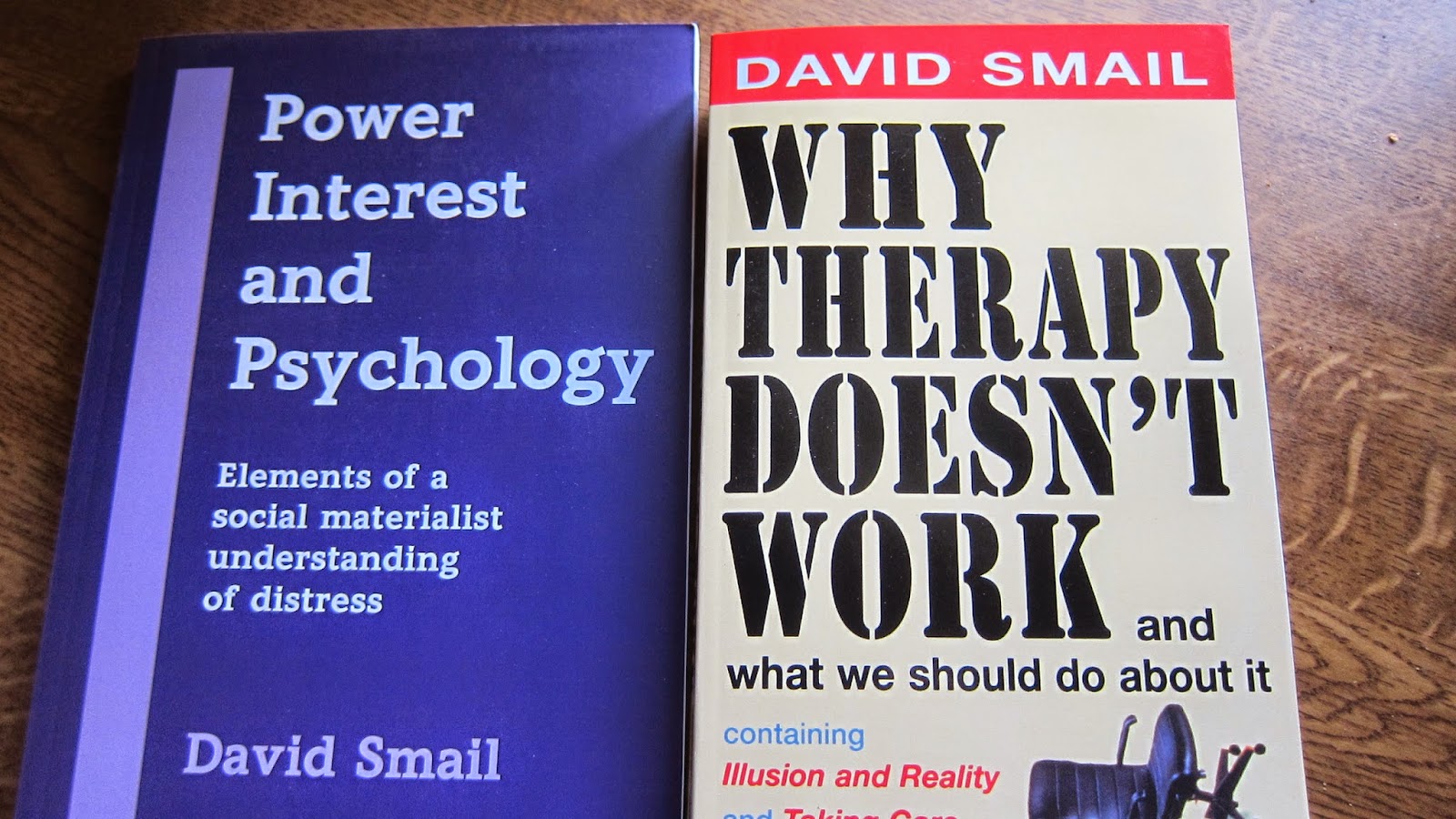 If you prefer to read things online, here's a collection of Google links on ....
Smail magical voluntarism


Quoting from:
Social Power and Psychological Distress
A talk given by David Smail in Nottingham, 14/10/02


Over the years, the psychotherapies have attempted to deal with this difficulty in various ways, often by trying to represent the movement from diagnosis to cure as somehow automatic. The psychoanalyst’s interpretations, etc., will lead through the process of ‘insight’ to an adjustment of the internal, unconscious processes that were causing the trouble. At the other extreme, it will be incumbent on the client of cognitive therapy actively to undertake the learning regimen prescribed by the therapist such that the offending ‘cognitions’ may be ‘restructured’. It’s usually not long before the inadequacy of these ideas (principally, the observation that they don’t work) leads to the conviction that nothing much can be achieved without the patient’s willed co-operation in the process of cure. This boils down in the end to the frank acknowledgement that whether or not someone gets better is a matter of their own ‘responsibility’, and indeed the notion of ‘responsibilty’ became a central pivot of humanistic approaches.

Now I think we’re operating with a very strange, essentially pre-scientific model here, one in fact that has more in common with seventeenth century magic and astrology than it does with modern scientific medicine (not that that’s always everything it’s cracked up to be). Indeed, I think one could call the philosophy that underlies most present-day psychotherapy and counselling one of ‘magical voluntarism’. Distressed people, that is to say, are supposed, via a short but perhaps intense period of interaction with a practitioner, to transform themselves into people no longer feeling distress.

Now a lot of people, I’m sure—and especially counsellors and therapists—will see nothing much the matter with this, but in my view it does begin to suggest that there is something really rather important that we have been leaving out of the picture. We seem to have been assuming, that is to say, that ‘there is no such thing as society’—or that if there is, it has no particularly significant role in determining how we feel.

Link to a rather critical review that made me very interested in the book:

And a review by Andy Fugard,  lecturer at University College London:

Therapy, Smail argues, tries to boost the perception of clients’ power to change, when in reality it is actual power that clients often need: power over material resources, money, employment, education; personal resources such as confidence and intellect; home and family life, a love life, and an active social life (Hagan & Smail, 1997). These are areas which often cannot be influenced by talk in the clinic. So why has individual therapy grown so popular? Smail argues – and emphasises that it’s nothing to be ashamed of – that therapists rely on income to put food on the table and pay the rent, just like their clients. He illustrates with the example of Sigmund Freud (p. 3) who wrote that “My mood also depends very strongly on my earnings… I have come to know the helplessness of poverty and continually fear it”. Freud, he argues, changed his theories so as not to offend those who paid the bills, e.g., clients’ parents. Smail argues that there is a great mysticism around therapy (p. 8): “rituals of therapeutic cure… bear a strong resemblance to the spells and incantations of sorcerers”, with practitioners rarely explaining to clients how their techniques (supposedly?) work. Together these interests help sustain psychotherapy.


Thanks to Andy Fugard for suggested Smail's books on Twitter. I have been using the term "societal harm" instead of "mental illness" for almost 25 years, and find much in them that fits this frame of thinking.

Linking to a post about a discussion on societal harm:

Smail is discussing the visible external forces of power that create societal harm; I haven't found any awareness of society's invisible war on the vulnerable: