Frames and networks of #understandingpsychosis

The link is to "Understanding Psychosis and Schizophrenia: a critique by Laws, Langford and Huda". And that tweet made me wonder, as I often do in discussions about mental help, if I am in a parallel universe. As did this:

The Mental Elf claims that "This website will help you find just what you need to keep up-to-date with all of the important and reliable mental health research and guidance."

Really? All I need? From a site that seems to know that there is only one "psychological model"?

And what is "the medical model"? Could dr Huda and The Mental Elf please define it for me?

And do some of the participants really think that mental help professionals are locked in an ongoing battle between science and dangerous pseudoscience?

And I see some people who seem chained to hierarchic trees of knowledge, and some people who are connected to networks ... people to whom service users, for example, are relevant sources of information.

And I see some people who are stuck in frames of cognition, and others who know that there are many different frames.

And I find it strange that professionals can have vehement arguments about something as vague as "the medical model" and "the psychological model", or suggest that they are complementary. But maybe indirectness is needed in discussions like the one going on in The Mental Elf?

Here is a 10-minute talk on direct and indirect speech:

If you are pressed for time, you can start at 7.45, when Steven Pinker begins to discuss the difference between individual knowledge and mutual knowledge, and then goes on to retell the story of the emperor's new clothes.

What he doesn't mention is the sales pitch of the crooks who duped the emperor: They offered him a new suit of clothes that was invisible to people who were unfit for their positions, stupid, or incompetent.

Has "science" become an invisible suit of clothes in the mental help professions, both psychiatric and psychological? Is fear of being thought unscientific, unfit for their positions, stupid and incompetent keeping mental help professionals from asking critical questions? (I'm asking, I don't know)

Dr Peter Gøtzsche knows more than I do. In Unwarranted Criticism of “Psychiatry Gone Astray” he wrote:

“At the Nordic Cochrane Centre, we have researched antidepressants for several years and I have long wondered why leading professors of psychiatry base their practice on a number of erroneous myths. These myths are harmful to patients. Many psychiatrists are well aware that the myths do not hold and have told me so, but they don’t dare deviate from the official positions because of career concerns. Being a specialist in internal medicine, I don’t risk ruining my career by incurring the professors’ wrath and I shall try here to come to the rescue of the many conscientious but oppressed psychiatrists and patients by listing the worst myths and explain why they are harmful.”

My perspective is that of one who grew up between continents, cultures, languages and belief systems. I am not anti-science, neither am I spiritually inclined; I am pro choice, diversity, evaluating authority, and "sceptically interrogating the universe with a fine understanding of human fallibility".

I am also an abject failure at accepting that something is true because an authority says so. Which has caused huge problems for me in the mental help system, and drove me to the brink of suicide 24 years ago.

And I have no affiliations in the MH field, so I'll say this explicitly:


I am looking very hard for evidence that, in discussions about mental help, the words "science", "evidence-based" and "knowledge" do not conceal compliance, orthodoxy, and fundamentalism.


As a child I had to deal with a constant barrage of different social rules, rights and wrongs, knowledges and authorities, and I knew about frames long before I had a word for them.

I learned that some people were stuck in boxes where they owned THE TRUTH. One was a British teacher in a British school in Darjeeling in 1957, who invaded my experience of being a Norwegian schoolkid with information about Norwegian schoolchildren in an ancient British geography book. That story is in THE CERTAINTY OF NORMLIGHTS.

Luckily the child I was also met many people whom I thought of as "real people" ... people who knew that there are different beliefs in different social and cultural boxes, and that "reality" is relevant only if it applies everywhere.

That led to knowledge about the concept of networks, long before I had a word for them.


At 6.00 Manuel Lima describes how "the internet has changed the paradigm of looking at social structures from a hierarchic point of view". His conclusion:

We are almost going back to the polymath, the Renaissance man mentality that it’s not just about being a specialist in one area, you need to know a little bit of everything. Or at least create outbound ties that you are able to learn from other disparate areas.

And I think this is the most beautiful aspect of knowledge that we can take into consideration by looking at this networked thinking. It’s more important even that we make that mental shift because I think there is immense benefit that can come from this network outlook of the world itself

And the reason for this longwinded introduction is that discussions on mental help often seem to take place between people who own THE TRUTH and people who have opinions; people who cleave to hierarchic trees of knowledge and people who are connected to networks.

Here is an article about the report from "the dangerous pseudo-scientists":


"We need brave people to speak out" This is a critical moment in mental health history: never have so many decision makers wanted things to change. That’s according to the National Clinical Director for Mental Health, Dr Geraldine Strathdee, speaking last week at the launch of ‘Understanding Psychosis and Schizophrenia', a report from the British Psychological Society’s Division of Clinical Psychology.

Angela Gilchrist's article is free, but you have to register to get the full text. First she quotes the National Clinical Director for Mental Health, Dr Geraldine Strathdee.

And yes, I'm shouting. And virtually jumping up and down and waving a virtual banner: 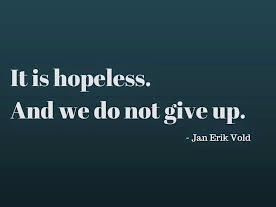 Is Anne Cooke a dangerous pseudo-scientist?

One of the most moving testimonies of the day came from survivor and activist, Jacqui Dillon, who spoke in mythic terms of her own struggle with psychosis and subsequent healing. Other speakers, including Psychiatric survivor and Clinical Psychologist Dr Rufus May, pointed to the meanings in psychosis and how these need to be understood and integrated. Service users and 'voice hearers' such as Rai Waddingham from ISPS UK, Mind in Camden and the Hearing Voices Network, spoke of their recovery journeys and how they had learned to live alongside voices and use these as a resource for their lives.

What about the chair of the Schizophrenia Commission and a fellow of the Royal College of Psychiatrists? Is professor Sir Robin Murray a dangerous pseudo-scientist? He ...

(...) said it was time for Clinical Psychologists to do more than 'look after their own patch'. He had 'no doubt' that psychological approaches such as CBT benefitted patients. This approach had altered the way in which psychiatrists thought about psychosis, he said. Professor Murray added that he would have been proud if the RCP had produced the report.

The next tweet strengthened my sense of parallell universes:

I had read the article dr Fulli links to already because of these two tweets:


So ... two completely different interpretations of the same text. The first tweet seems to come from a hierarchic tree of knowledge, and the last two strengthen my resolve to not give up.

Sam Thompson's oil looks good to me, and I hope it's OK to reproduce it so extensively:


While these battles for the soul of psychiatry rage on, we offer a practical suggestion that all mental health practitioners can get along with in the meantime. In clinical practice, try as far as possible, to let the service users themselves identify the conceptual frame (ie, biological, psychological, social, or any combination thereof) within which their difficulties are understood. Some people find it helpful to think of themselves as having an illness like any other, a chemical imbalance, or a brain disease. Others find seeing their disorders as stemming from a difficult upbringing or traumatic life events more useful. Some might prefer explanations that have cultural or religious significance. The job of the clinician is not to use their innately powerful position to impose a particular perspective (eg, “unfortunately, you have an illness called schizophrenia”). Rather, the clinician's job is to listen to how the service user understands his or her experience, join them in a process of collaborative sense-making, and be honest about the inherently speculative and socially constructed nature of all diagnostic and formulatory endeavours.

A corollary of this idea would be acknowledgment of a service user's right to reject a diagnosis if they do not believe it characterises their experience in a helpful way. Similarly, they have the right to reject any other kind of formulation, case-conceptualisation, analytic interpretation, and so on. Such rejections should not be regarded as evidence of lack of insight or denial, but as a failure by the clinician to enter the service user's world empathically and sensitively.

As I understand this, Sam Thompson is calling for cooperation between different opinions, suggesting that mental helpers set aside their innate power in order to work constructively with autonomous individuals who need help, meeting them where they are.

In these words of Sam Thompson, dr Fulli found "a miracle cure for anosognosia". And she despairs for the future:


My opinion is that many patients with psychosis might die by suicide to go to prison& many carers will suffer from this report. @Mental_Elf— Ivana Fulli (@DrFulli) December 4, 2014

I suggest that dr Fulli and others who share this opinion take a look at #whywedontengage  in Twitter.

I also appreciate her willingness to engage in discussion instead of blocking me, like other scientific mental help professionals have done on Twitter when I ask questions.

I do doubt that what she has learned and experienced is the only way of helping people. And I doubt it's the best way:


@AlresfordBear @SameiHuda With that frame of mind you risk over therapy Often safer to say there is nothing wrong with you, life is unfair.
— Ivana Fulli (@DrFulli) December 10, 2014

And I wonder ... Where has dr Fulli learned to tell people that "life is unfair"?

Does she realize how much suicide, imprisonment and suffering there already is within the existing mental help system?

Does she see how the concept of "anosognosia", which to her is real and maybe even scientific, can harm people?


On insight and what not to do to people in pain ...

The Understanding Psychosis report is not perfect, and I would have been sceptical if it was presented as such.

But in following the hashtag on Twitter, I have seen that co-authors of the report retweet critical articles about what others see as missing from it.

I hope the report will become an extension of a network of information - partly evidence-based and partly based on knowledge and experience that cannot be counted - where "more voices are heard", and no mental help professionals are stuck in hierarchic trees of knowledge.

And all I want for Thingymas this year, is more knowledge of frames and networks in discussions about mental help. And, of course, more explicit language.