"The Goldwater rule is the informal name
for a precept of medical ethics
promulgated by the American Psychiatric Association.
It forbids psychiatrists from commenting on
individuals' mental state
without examining them personally
and being authorized by the person
to make such comments."

@ivaalsg I would say it's people who have dx not vice versa. Goldwater rule is a good rule
— Samei Huda (@SameiHuda) December 13, 2014

@SameiHuda @ivaalsg Goldwater rule can't apply to those wanting to be listened to as experts by experience of a diagnosis in a discussion.
— Ivana Fulli (@DrFulli) December 13, 2014


I would like to ban the phrase "attention seeking" from Mental Health— Samei Huda (@SameiHuda) December 12, 201


Yes, please ban "attention-seeking"! It does me good to read this suggestion from a psychiatrist, especially from a co-author of ....


Understanding Psychosis and Schizophrenia: a critique by Laws, Langford and Huda

And I suggest that professionals stop seeing discussions on mental help as a war between science and superstition, as the two other co-authors of this critique seem to do: 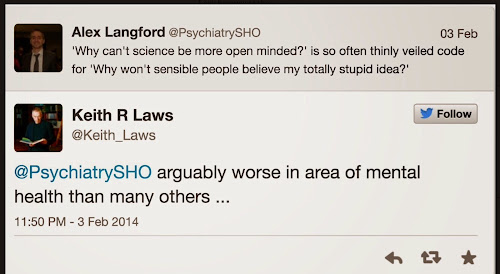 "... show me and I will believe" sounds eminently logical and scientific. And sometimes "science" can become a frame that filters out relevant information.

"Frames are cognitive shortcuts that people use to help make sense of complex information. Frames help us to interpret the world around us and represent that world to others. They help us organize complex phenomena into coherent, understandable categories. When we label a phenomenon, we give meaning to some aspects of what is observed, while discounting other aspects because they appear irrelevant or counter-intuitive

I am keeping an open mind about this, and I am looking for evidence that "science" in a context of mental help is open-minded enough to use hypothetical-deductive reasoning, and to factor in the strength, resilience, complexity, unmeasurability and tangled squalor and beauty of human existence.

One of the arguments of anti-vaxxers is that vaccines are not scientifically proven to be effective: there have been no randomized double-blind trials, so no evidence. The fact that vaccines work does not count.


"No evidence" also seems to be a scientific argument in the field of mental help, for example in the discussions around the "Understanding Schizophrenia " report. And service user narratives about what works for them does not seem to count.

I have learned a lot from reading James Coyne's analyses of research, and I was (perhaps naively) surprised when I read this: 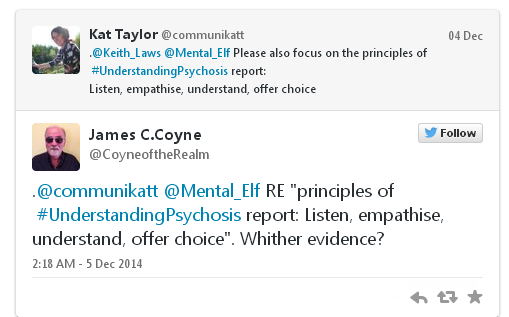 Evidence? How does one measure listening, empathy, understanding and choice? 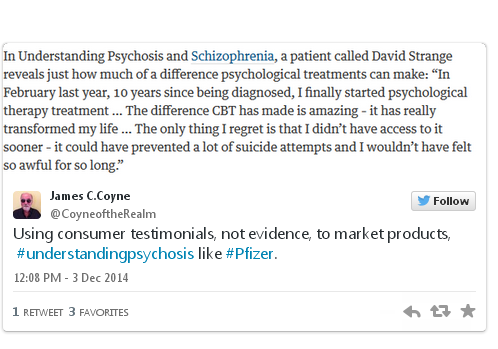 Are "narratives" and "testimonials" synonymous in Coyne's frame?

This is a superb and a thorough takedown of the 200 pages or so, of a shamelessly retro book put out by British Psychological Society for its Division of Clinical Psychology. One of the shameful actions of the BPS is that many of the authors of this book are identified as “service users.” But there was no procedure for sampling adequate range of service user opinion. I’m confident that many, perhaps most service uses would not identify with the voice is being given to them. This is not just a matter of just a methodology, but of ethics. I highly recommend this blog post, but don’t recommend the book unless you’re drunk and stoned, like some of the psychologists who contributed to might have been.

How can Coyne be so "confident that many, perhaps most service users would not identify with the voice being given to them"? Evidence?

And who are "experts by knowledge?


"An expert by experience who refuses expertise by knowledge ..." Who are experts by knowledge in this context, @CoyneoftheRealm ?
— Ingrid J. Vaalund (@ivaalsg) 8. desember 2014


I had not really expected a reply to this question. Neither had I expected to be blocked. Which I was.

I know that there are people who feel comfortable in the frame of "mental illness". And I and other people with experience of psychosis and other mental problems do not.

I can't speak for anyone but myself, but I am incapable of believing that something is true because an "expert by knowledge" says so. The expert information has to fit my life, what I have seen and experienced ... and it if doesn't, why should I believe it?


In Choosing a direction: Psychiatry or liberation? I wrote ...

Dr Fulli is undoubtedly an expert by knowledge. Has she really learned that she practices medicine and stops suffering by dismissing grief with "life is unfair"? 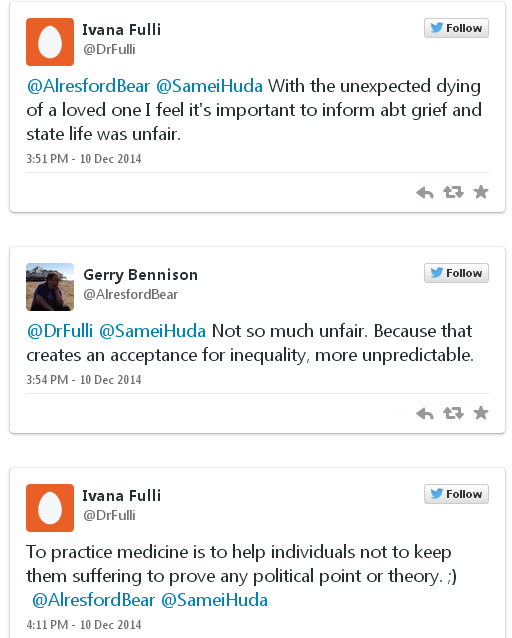 I still wonder: Who are experts by knowledge? What knowledge, and how is it acquired?

The knowledge that dr Fulli brings to bear on people "with the unexpected dying of a loved one", I consider a belief system. She knows it works. Evidence?

In my experience, what works is not fearing or avoiding grief, but allowing it, accepting it, being in an individual process of grieving, letting it run its course. That has worked for me, I know it has worked for others, and I would not presume to state that it works for everyone.

Are the narratives and opinions of people with personal experience of psychosis and other mental problems only relevant if they have degrees in ... what? Psychiatry, psychology, neurobiology?

Are the opinions of people with such degrees only relevant if they are evidence-based?


Is there a war between "antipsychiatry CPs &psychiatrists"?

Last Rt content is quite a mystery to my mind: How can one think it is OK for both antipsychiatry CPs &psychiatrists to use service users?— Ivana Fulli (@DrFulli) December 11, 2014

How can professor Coyne and dr Fulli not know that people with experience of mental problems are autonomous entities, capable of thinking critically and deciding independently what works for them and what does not?

They seem to be in a frame that is so different from mine that I doubt we can find common ground. And I thank them for stating their opinions so explicitly.

I haven't really understood what "evidence-based" means in the field of mental help until I read their reactions to "Understanding Psychosis".

In my frame, this is not about "consumer testimonials", antipsychiatry/psychiatry or about service users being used by anyone. Quoting the National Clinical Director for Mental Health in the UK, Dr Geraldine Strathdee:


"We need brave people to speak out."

Framing the narratives of people who speak out as "testimonials", and dismissing and psychopathologizing the opinions of people with experience ... from where I stand, this is caused by very unscientific prejudice. I choose to assume that such patienting is not deliberate, so it could also be called "microaggression":


Microaggression theory is a social theory that describes social exchanges in which a person says or does something, often accidentally, and without intended malice, that belittles and alienates a member of a marginalized group.

Would it be OK if I constantly referred to dr Fulli as "that prolific French psychiatrist tweeter"? She is French, she is a psychiatrist, she does tweet a lot when she feels strongly about something, but I don't think so.

It would place a label between us that would filter out information from her.

She deserves better: She is who she is and she writes what she writes, and I use her name to remind me of that.

Would it be ethical and OK if medical specialists referred to people they disagreed with in a somatic health care discussion as "diabetics"? And assumed that their opinions were caused by their diabetes, and defended this assumption because the persons blogged about diabetes?

I don't think so, and I suggest that similar behavior from mental help professionals on Twitter gets hashtagged #GoldwaterRule:

@WesselyS @rcpsych @Keith_Laws "KL is a pompous asshat..." from @Sectioned_ " I just told him to get over himself.." from @BipolarBlogger— Ivana Fulli (@DrFulli) December 2, 2014

What did Professor Laws, who has a long history of lashing out at SUs on Twitter, feel about this fierce defense of his professional honour?

What will the @rcpsych do about "hate tweets" from "BPDBloggers"?

And what did the @TheLancetPsych think of the following interchange?


@DrFulli @Keith_Laws Simple. No place for personal attacks in scientific debate, from anyone, against anyone. http://t.co/7OTl6OmqUB— Lancet Psychiatry (@TheLancetPsych) December 3, 2014

@TheLancetPsych Thanks but I reckon encouraging hate tweet from SU on Twitter belongs to a completely diff set of moral issues. @Keith_Laws— Ivana Fulli (@DrFulli) December 3, 2014

I would really, really like to know what "completely different set of moral issues" dr Fulli is thinking of.

The article in The Lancet Psychiatry brings up issues that are vital in any discussion on mental help. Inserting some bits here, with comments:


The first is to assume the best of one's opponent: that their argument proceeds not from self-interest, financial interest, or wilful ignorance, but from genuine curiosity and a desire to improve the lives of people with mental health problems.

And please, please do not assume that the arguments of people with service user experience proceed from their diagnoses. Instead, assume first that they are persons, autonomous entities who can reason and think critically. You can always reassume if they demonstrate that they cannot.


There is a view that so-called punching up to perceived figures of authority is justifiable and necessary, but punching up is still punching someone. There is always potential in the discussion of mental health issues to trigger distress, as everyone, patient or professional, has an unseen personal history and sensitivity.

What I am addressing now, is the prevalence of punching down by mental help professionals on Twitter.

Punching is punching, of course, whatever the direction, but psychopathologization is one reason for punching up: When opinions are derailed with patienting, calm and reasonable dialogue is impossible.

And let's not forget the imbalance of power between mental help professionals and people with experience: 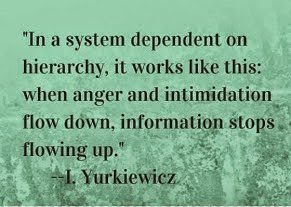 The final point is to ensure that those whose voices are not listened to enough are given the space and opportunity to be heard. Their numbers include individuals such as mental health nurses and social workers, who provide a large amount of care but who are given little time compared with psychologists and psychiatrists. Most important, the voices of patients must be "airtime" respected in all their diversity.

Linking to a Storify ...
https://storify.com/SectionedUK/dr-fulli-no-idea-who-she-is

And quoting one sentence ...

It would be helpful to be able to invoke #GoldwaterRule on this type of response, especially now, when patienting in the debate around "Understanding psychosis" can restrict the open dialogue that I have found so interesting.

LATER: I HAVE INSERTED RESPONSES FROM DR FULLI, and I thank her very much for stating her opinions so explicitly and for not blocking me.

I will reply to the points she brings up, but that requires slow thinking ...

(Link to a review of Daniel Kahneman's "Thinking, Fast and Slow")


... and I have a heavy workload at the moment, so it must be done in installments. The first one will be on "knowledge and experience and hazardous gurus".

I have collected dr Fulli's replies in screenshots. They are in reverse chronological order, so if you want to read them you should begin at the end: 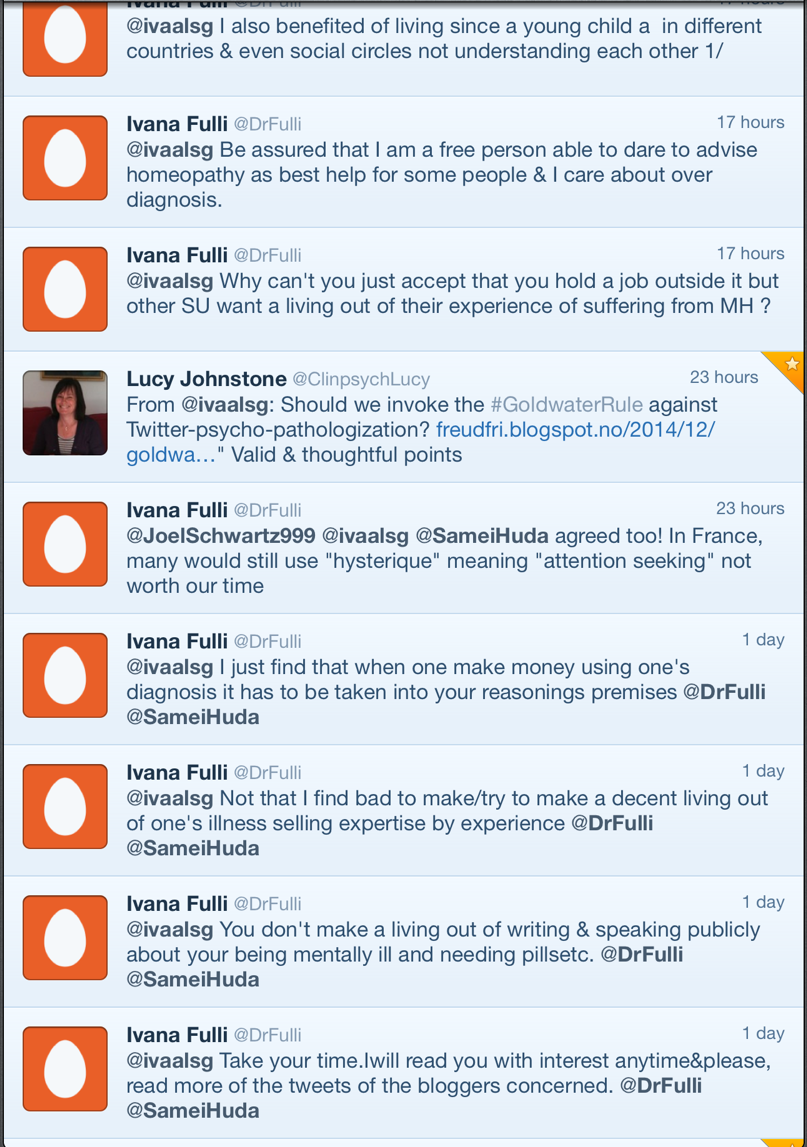 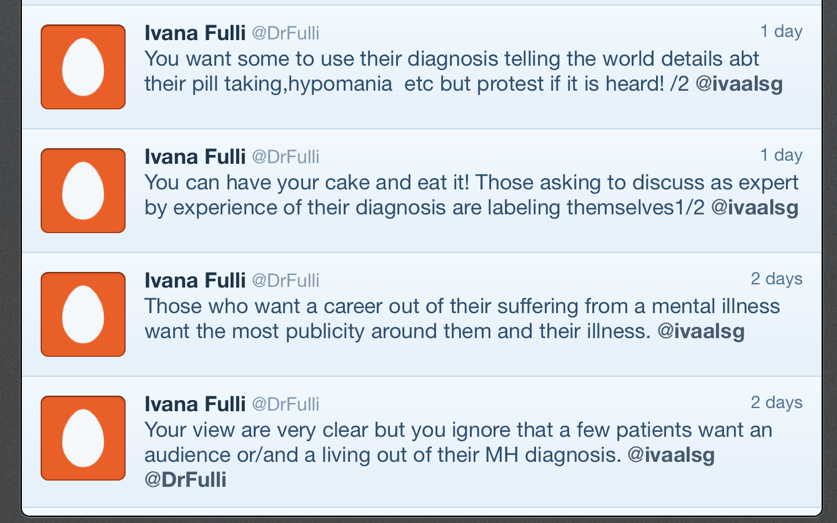 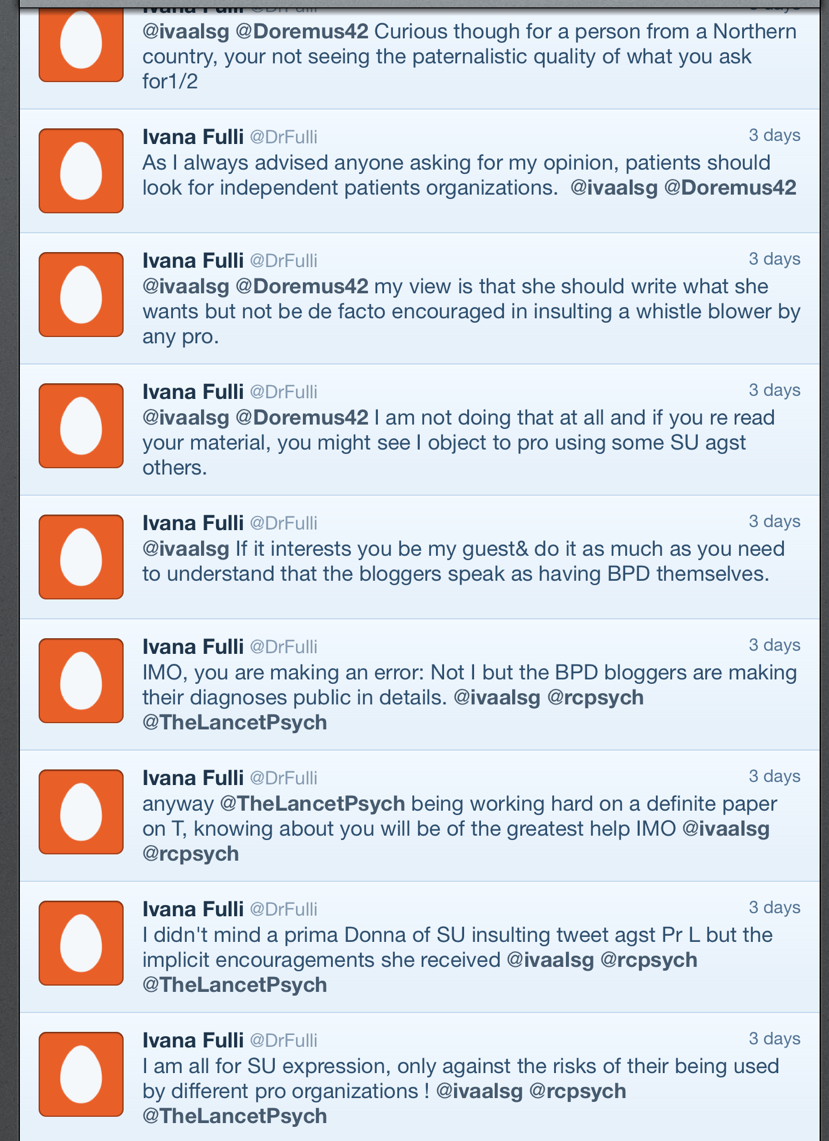 Jan 26: some personal stiff snipped, to be used in another context.
Lagt inn av Ivaa kl. 15:10